Today, Northvolt announced a partnership with the municipality of Skellefteå in northern Sweden for building Europe’s largest lithium-ion battery manufacturer. The factory will employ 2,000 to 2,500 persons.

Access to clean energy was crucial for the  the decision to locate the enormous factory in Skellefteå, Northvolt argued when presenting the news on Thursday morning. The regions of Västerbotten and Norrbotten have huge hydro power plants, generating electricity without a negative carbon footprint.

Construction work is estimated to cost over €4 billion. The facilities will have four blocks of 8 GWh capacity. In size, roughly 500,000 square meters, equivalent of nine football fields.

It is the fast-growing European demand for batteries for electric vehicles and the renewable energy production’s need for better storage solutions that enables Northvolt to attract investors for a battery giga factory.

In Nevada, USA, Tesla is currently building a factory in cooperation with Panasonic aimed at an annual production of 35 GWh, enough to supply half a million cars with batteries. Northvolt plans for 32 GWh annually.

In addition to Skellefteå, Northvolt will build a Research and Development (R&D) facility in Västerås, southern Sweden with operations that will employ additional 300-400 people.

The factory in Skellefteå will in addition to produce the lithium-ion batteries, also have capacity for recycling bi-products and older batteries. 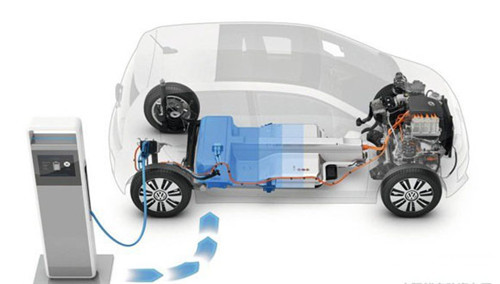 Norway is a leading market for electric cars.

Worldwide electric car stock surpassed two million vehicles in 2016 after crossing the one million threshold in 2015. Sales are growing fast and customer waiting lists get longer. In Norway, where the state has introduced a number of impact incentives making electric cars competitive, 19% of all sales are today fully electric. If you order Opel’s new Ampera today, you will likely not get it before 2019. Demand is bigger than supply. More than 130,000 battery cars are already on the roads in Norway, not bad for a country with slightly more than five million inhabitants. Transition to electric vehicles continues. The government aims at a 2025 goal when petrol cars will no longer be sold in the country.

China, Great Britain, France and India move in the same direction, saying they will ban sales of petrol and diesel cars by 2040. All part of a plan to meet the Paris climate accord.

Volvo, VW and others

The car industry understands the point governments and consumers are making. Like Volvo, who says all new models from 2019 will either be fully electric or hybrids. VW, the largest car maker in Europe, says a series of high-volume electric cars will be launched from 2020 with a goal to have eight electric models on the market before 2025. Tesla, the largest pure electric car manufacturer, will deliver 200,000 cars to the market this year and has a planned production rate of 500,000 cars for 2018.

A challenge for all car makers though, is how to ramp up production of batteries.

The construction of the factory in Skellefteå is scheduled to begin during the second half of 2018, Northvolt informs in a press release on Thursday. Once the first quarter is completed in 2020, it will produce 8 GWh worth of battery capacity per year. The full factory, which will be completed in 2023, will produce 32 GWh per year.

“The auto industry alone will need batteries in huge numbers to replace fossil fuels with electricity. The ability to store energy is also crucial to free the world’s energy generation and distribution from coal, oil and natural gas. Northvolt accelerates this transition by building Europe’s largest battery factory,” the statement reads.