A new polymer raises the bar for lithium-sulfur batteries. 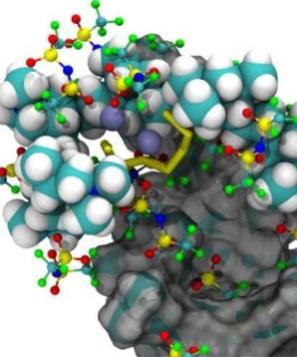 Lithium-sulfur batteries are promising candidates for replacing common Lithium-ion Batteries in electric vehicles since they are cheaper, weigh less, and can store nearly double the energy for the same mass. However, lithium-sulfur batteries become unstable over time, and their electrodes deteriorate, limiting widespread adoption.

Now, a team of researchers led by scientists at the U.S. Department of Energy's Lawrence Berkeley National Laboratory (Berkeley Lab) have reported that a new lithium-sulfur battery component allows a doubling in capacity compared to a conventional lithium-sulfur battery, even after more than 100 charge cycles at high current densities, which are key performance metrics for their adoption in electric vehicles (EVs) and in aviation.

They did it by designing a new polymer binder that actively regulates key ion transport processes within a lithium-sulfur battery, and have also shown how it functions on a molecular level. The work was recently reported in Nature Communications.

"The new polymer acts as a wall," said Brett Helms, a staff scientist at Berkeley Lab's Molecular Foundry and corresponding author of the study. "The sulfur is loaded into the pores of a carbon host, which are then sealed by our polymer. As sulfur participates in the battery's chemical reactions, the polymer prevents the negatively charged sulfur compounds from wandering out. The battery has great promise for enabling the next generation of EVs."

When a lithium-sulfur battery stores and releases energy, the chemical reaction produces mobile molecules of sulfur that become disconnected from the electrode, causing it to degrade and ultimately lowering the battery's capacity over time. To make these batteries more stable, researchers have traditionally worked to develop protective coatings for their electrodes, and to develop new polymer binders that act as the glue holding battery components together. These binders are intended to control or mitigate the electrode's swelling and cracking.

The new binder goes a step further. Researchers from the Organic Synthesis Facility at Berkeley Lab's Molecular Foundry, a research center specializing in nanoscale science, designed a polymer to keep the sulfur in close proximity to the electrode by selectively binding the sulfur molecules, counteracting its migratory tendencies.

The next step was to understand the dynamic structural changes that are likely to occur during charging and discharging as well as at different states of charge. David Prendergast, who directs the Foundry's Theory Facility, and Tod Pascal, a project scientist in the Theory Facility, built a simulation to test the researchers' hypotheses about the polymer's behavior.

"We can now reliably and efficiently model sulfur chemistry within these binders based on learning from detailed quantum mechanical simulations of the dissolved sulfur-containing products," stated Prendergast.

The research team took their study one step further by also examining the performance of lithium-sulfur cells made with the new polymer binder. Through a set of experiments, they were able to analyze and quantify how the polymer affects the chemical reaction rate in the sulfur cathode, which is key to achieving high current density and high power with these cells.

By nearly doubling the Lithium Battery's electrical capacity over long-term cycling, the new polymer raises the bar on the capacity and power of Lithium-sulfur Batteries.

The combined understanding of the synthesis, theory, and characteristics of the new polymer have made it a key component in the prototype lithium-sulfur cell at DOE's Joint Center for Energy Storage Research (JCESR).