LFP is more effective than NiCd in two ways.

All rechargeable batteries lose charge over time, but when using LFP, the monthly charge rate is only 3-5%. NiCd loses 15% in the first 24 hours, and thereafter drops by 10-20% every month (depending on temperature). As a result, the charger in the emergency device equipped with NiCd or NiMH batteries works almost continuously, while the charger in the LFP circuit works with low current in short-time and infrequent emergencies.

LFP batteries have little memory effect so their performance remains almost constant till they reach end of life, usually defined as 70% of rated capacity. Typically, an LFP battery will have a life of 8-10 years. 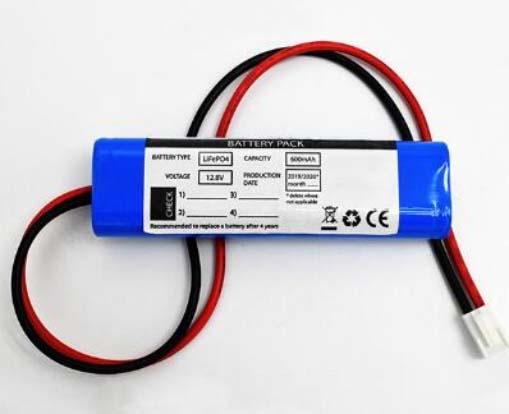 The performance (power storage) of NiCd and NiMH declines rapidly with every charge/discharge cycle, so they typically need to be changed after 3 or 4 years. The routine testing of emergency lighting required by BS 5266 contributes to shortening the life of NiCd batteries. It is also common for NiCd batteries in new-build projects to fail in their first year of life if they have been fully installed in the construction phase when the mains power would normally be switched off completely overnight. The resulting nightly discharge and daily re-charge degrades the NiCd batteries to the point that they can be due for replacement withing the first year of occupation.

High temperatures. LFP is unharmed by ambient temperatures up to 60ºC, whereas NiCd and NiMH can only tolerate 55ºC and 50ºC respectively.

Cadmium is banned under the RoHS Directive because it is a dangerous pollutant.

Cadmium is highly toxic to almost all animals and many plants. It is also very persistent in the environment, being not easily combined with other elements that would render it harmless. NiCd batteries therefore have to be recycled with great care. LFP batteries must also be recycled, but the materials used are inherently less harmful than those used in NiCd and NiMH batteries.

2. Cadmium has limited future use.

Now that superior alternatives to cadmium are available for use in batteries it is to be expected that the RoHS directive will be amended to eliminate the exemption that has been allowed till now.

3. Lithium has a long future ahead.

Lithium iron phosphate in particular is favored for its safety, economy, and efficiency and is being increasingly used in many applications, such as vehicles, in addition to emergency lighting.